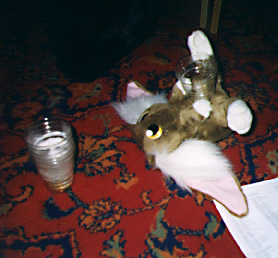 Ryo-ohki overindulges at the beer tasteing. Some more stupid pictures of things here.

Ok...So, I went to the 3 day Shin-nen-kai anime con on the 2nd - 4th Jan 1998doh!. T'was most entertaining, here's some gibbering on about it, and a few far from helpful pictures..

I've left this too long and I've forgotten what I was going to say. Wot i did: I watched Lots of anime, (obviously!), bought not enough stuff, took not enough entertaining photographs, met nice people (including UY fan Stewart- Visit his page!), walked around as a human Urusei Yatsura reference, had fun!

Somehow I don't think Manky Video will be back next year!

Some highlights in the watching stuff stakes:

Things to remember at future Cons: